Thank you! Your submission has been received!
Oops! Something went wrong while submitting the form.

STORE is a new layer-one staking protocol incentivizing and securing a zero-fee Web3. $STORE is the unit of account on the STORE protocol.

Polkadot
11.9%
12.9%
14.7%
14.7%
$8.2 Billion
350 DOTs
[1] STORE Yields are calculated as an average of four years (Sep. 2023 - Aug. 2027). Yields are based on a total authorized supply of 1 billion $STORE.
[2] STORE inflation rates are calculated as an average of the first four launch years. Inflation is based on a total authorized supply of 1 billion $STORE. Before 4 years expires, STORE will need to vote on its security.
[3] Real Yields are the annualized rate of return on staked tokens reduced by the annualized rate of inflation. All  Yields are calculated using a Total Supply Basis (if it’s available).
[4] Liquid supply is the total number of tokens issued by the protocol since inception.
[5] Circulating supply is the amount of tokens which can easily circulate in open markets.
Data updated as of June 14, 2022. Yield data non-STORE protocols provided by StakingRewards.com and inflation rates provided by Messari.
PROTOCOL INCENTIVE
Incentivized by Dynamic Proof-of-Stake (DyPoS)
DyPoS, a STORE invention, provides the protocol with algorithmic stability for both off-chain and on-chain network security. This ensures STORE doesn’t overpay for security, while incentivizing network operators to meet or exceed the protocol’s Security Budget. DyPoS introduces predictable surge fees into blockspace when demand > supply. STORE’s leaderless economics incentivizes democracy to spread to computing resources on the STORE protocol. Finally, STORE’s Dynamic DDoS protection makes large-scale spam attacks on STORE Chain technically impossible. 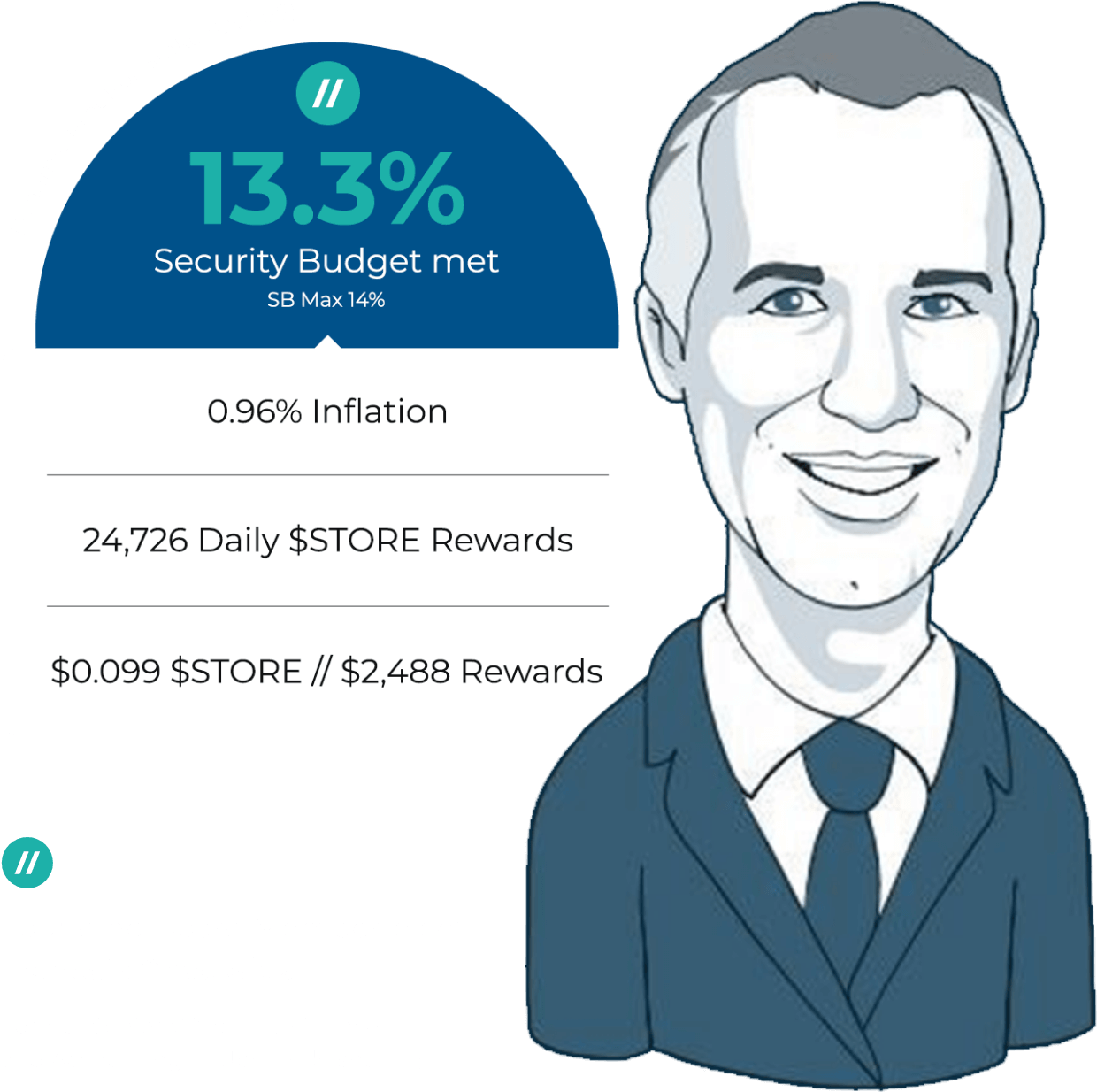 $STORE Token Economics
TOKEN ECONOMICS
About $STORE Economics
In progress: 8-year founder vesting  ·  Long-term staking  ·  Low inflation  ·  Industry-leading yields  ·  Ongoing auctions to grow network security
To be voted on: A long-term release schedule with incentives  ·  Incentives that could commit up to 75% of Total Supply for 8+ years to staking
$STORE Data
Name of asset (unit of account)
$STORE
Sub unit
bit
1 $STORE equals
100,000,000 bits
Allocated $STORE Supply
573,484,922
Authorized $STORE Supply
1 billion
Price per $STORE (private)
$0.039
Market Cap (if trading)
$39MM
% Total Supply Sold-To-Date
24.10%
% Remaining To-Be-Sold
15.90%
$STORE Details
Type
Will begin as an ERC20 and then be native
Name of Token
$STORE
Token Usage: $STORE is a utility token. Owning $STORE is a right to trust-minimized computing resources on the STORE protocol. The utility token is used for staking, voting, and payments on the STORE Cloud. At layer one, Miners are paid $STORE inflationary rewards to secure blockchain databases voted on by STORE Governance. At layer-two, developers pay Miners in $STORE tokens for trust-minimized cloud resources.
$STORE Economics
Type
Staking Rewards
Ongoing Emission Type
Inflationary
Max Inflation Per Year
10-20 Million $STORE
Inflation Schedule
Will fluctuate to incentivize a maximum of 20% to 51% of $STORE staked.
Emission Schedule
Will decrease yearly but the project has committed to a predictable and perpetual maximum emission schedule for project-controlled tokens that is overseen by governance.
NOTE: STORE expects an equitable release schedule for $STORE to be voted on by its First Governance (one $10,000 or more token buyer / one vote) in Q3 2022.
‍
NOTE: STORE is considering a Committed Supply proposal for STORE holders to commit to competing in STORE auctions by locking $STORE up for 1-4 years, earning yield whether they win auctions or not. This proposal gives STORE auctions guaranteed supply. Auctions give STORE security and governance. Maximum new inflation to fund It’s estimated that 70% of today’s STORE Allocated Supply could be committed for up to four years.

STORE’s active First Governance is one vote / one $10,000 purchased wallet. It works very well and prevents whales and founders from controlling the early stages of the project.
Inflationary Rewards are governed by the Security Budget
The Security Budget (SB) determines the maximum inflationary rewards issued by STORE. The SB is the percentage of circulating supply the protocol rewards to be staked in exchanged for network security. If there’s more stake than the SB allows, the Earnings Power of all Miners is adjusted down to match the SB while inflation is maxed out. If the SB isn’t met by Miners, then not all inflationary rewards are issued to Miners. The SB is set by STORE Governance.

PROTOCOL EVOLUTION
STORE expects to have five launch phases and a test network
The STORE protocol evolves one launch phase at a time. As utility grows, so does the budget for network security — whether it be through inflationary rewards, an increased Security Budget, or fees. 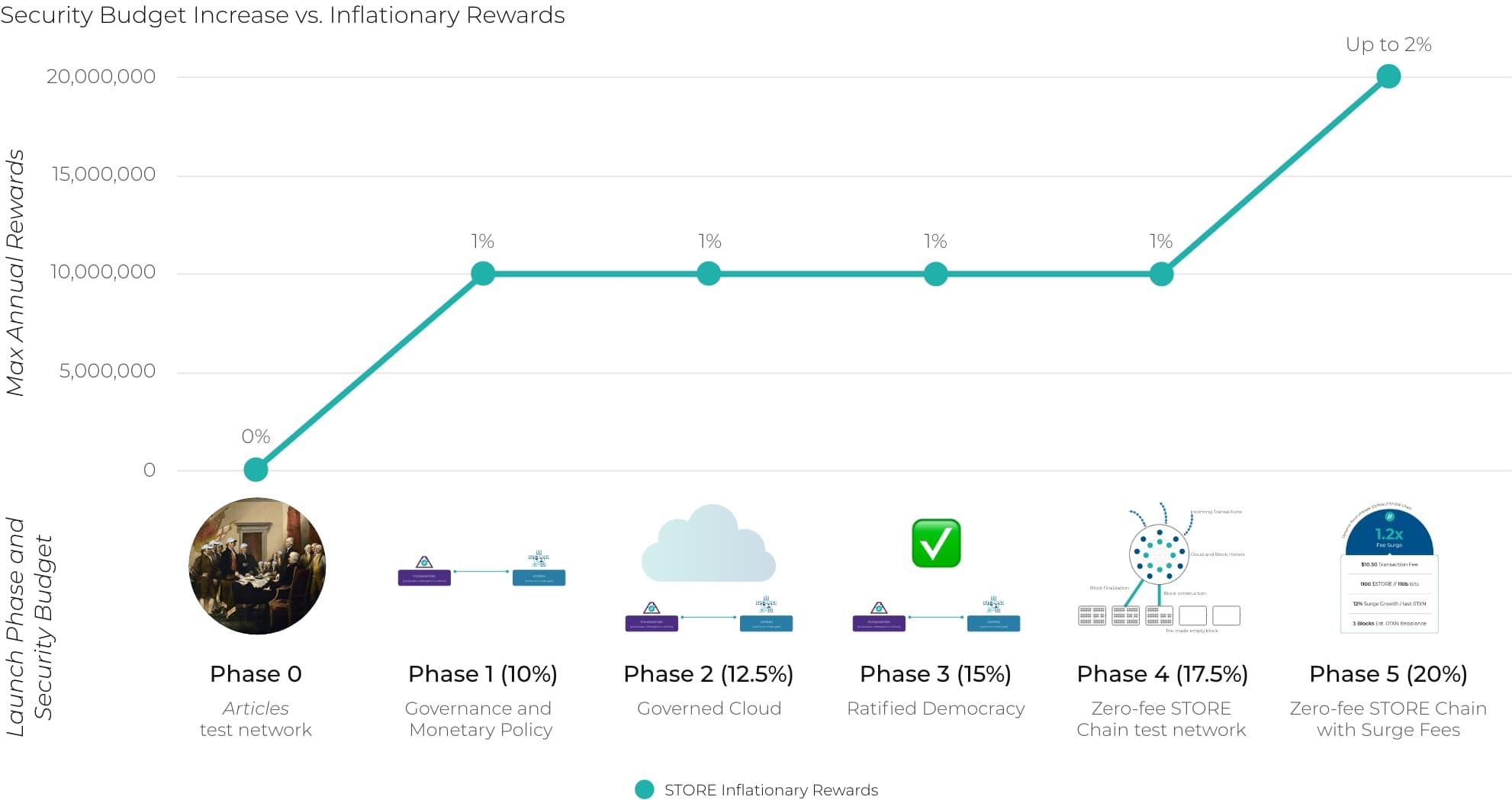 Subject to change as R&D evolves. Before bidding in auctions, founding network operators will agree to this upgrade path to the protocol.